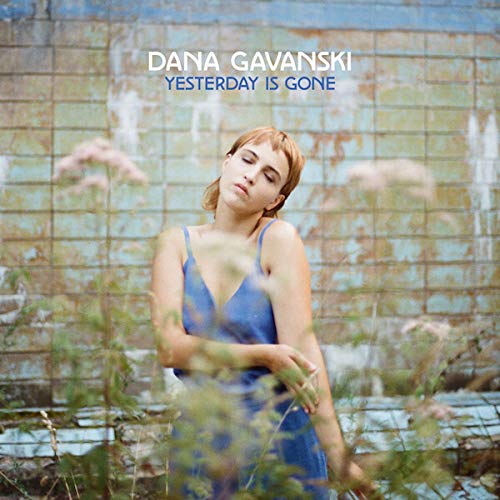 I'm learning how to say goodbye / to let you go and face the tide / to wrap my feelings in a song,' sings Dana Gavanski on the title track of her debut album, Yesterday Is Gone. To wrap her feelings in a song: this is the task Gavanski has dedicated herself to with this record. By turns break-up album, project of curiosity, and, as Gavanski puts it, 'a reckoning with myself', Yesterday Is Gone is her attempt to 'learn to say what I feel and feel what I say': an album of longing and devotion to longing, and of the uncertainty that arises from learning about oneself, of pushing boundaries, falling hard, and getting back up.The record is a co-production between Gavanski, Toronto-based musician Sam Gleason, and Mike Lindsay of Tunng and LUMP. While Gleason helped Gavanski bring out the tunes, Lindsay's input marked 'the beginning of developing a sound that was closer to what I had in my head'. Though excited by the other elements of a song introduced during production, Gavanski and Lindsay were keen on 'finding essential things, not overblowing, keeping things bare and letting the elements speak for themselves'.The album shapeshifted as it passed through the hands of Gavanski, Gleason, and Lindsay, taking on different tastes, feelings, and visions. When Gavanski performed the songs with a band, they found new form again. She was intrigued by performers like David Bowie and Aldous Harding, who inhabit different personalities on stage, physically tuning themselves to their music.While on a crowded train last spring, Gavanski sang the Macedonian song "Jano Mome" to a cheering group of commuters. The moment, brief but beautiful, lays bare Gavanski's craving for live spontaneity. But it also reflects her injection of stylish drama and vivid emotion into the folk landscape that inspires her, from contemporary singers H Hawkline and Julia Holter, to stalwarts Fairport Convention, Anne Briggs, Connie Converse, and Judee Sill. Expressive urges run all through Yesterday Is Gone. Moments of beguilement splinter a backdrop of tenderly picked guitar, bass, synth, and poppier elements, which commune to produce her own kind of wall of sound. 'Often we have to go a little far in one direction to learn something about ourselves,' she says. The months of solitary writing and self-doubt testify to this, but they've led to Yesterday Is Gone: an optimistic, steely-eyed gaze into the future.

Phrases.com is a huge collection of common phrases, casual expressions and idioms – collaboratively assembled by our large community of contributing editors.

Improve your English and writing skills by navigating our comprehensive phrases dictionary alphabetically, or simply search by keywords.

To board or mount, especially a vehicle.

Please get on the bus as quickly as possible.   She has no trouble getting off a bus but has difficulty getting on.

Discuss everything about the Phrases.com website with our community:

We're doing our best to make sure our content is useful, accurate and safe.
If by any chance you spot an inappropriate comment while navigating through our website please use this form to let us know, and we'll take care of it shortly.

or fill the form below

Use the citation below to add Phrases.com to your bibliography:

Help us build the largest human-edited phrases collection on the web!

The Web's Largest Resource for

A Member Of The STANDS4 Network

Our most popular phrases

"those who don't know how to look will never find it."
Trose
"life is a mathematical complex that you gain or lose with your actions."
Life
"prima di dire: non sei capace di volare, dagli le tue ali."
Ali
“whoever is guided by faith does not follow any path.”
whoever
“with so many signs, following the right path is only for those who are guided by faith.”
Signs